Each year we try to get down to the excellent Cardington Slalom Course. We’re very fortunate to be able to use the UK’s first artificial course, newly upgraded and still probably the UK’s most beginner-friendly, located in Bedford’s Priory Country Park, 2.5km downstream from our town centre.

The Scouts were treated to over 1.5 hours of it, in the rain, and had an absolute blast. Scouts new and old love coming here, and it’s a real highlight on our calendar. Many thanks to Dave McCarthy of Bedford’s Viking Kayak Club (Where Etienne Stott started) for inviting, and running the evening. After a reccy by Graham, the teams were given a sheet of items to find arranged on a grid. The first game was to complete a line, with a small prize, and the main game was to collect a “Full House”. Some items were easy, and others more challenging or creative to find, such as worms which required a bit of stone-flipping, or poo! To avoid too much ripping up of nature and pulling apart of insects, teams were asked to bring a camera phone to capture the evidence. Bringing a totally modern approach to nature hunting (there were still plenty of grubby hands, which is important)!

All in all, 19 Scouts turned up, and seemingly all had fun. Hats off to the winning Team, who were closely followed (by 10 seconds) by a breakaway team of two, who completed it in half the time of the winners! A special prize will wing it’s way to them both. We had a flipping good time making, racing, judging, flipping, dropping and eating pancakes to both celebrate Shrove Tuesday, and top up our camp-cooking skills. The scouts even had a smallest “pancake” competition too! Check out the photos… 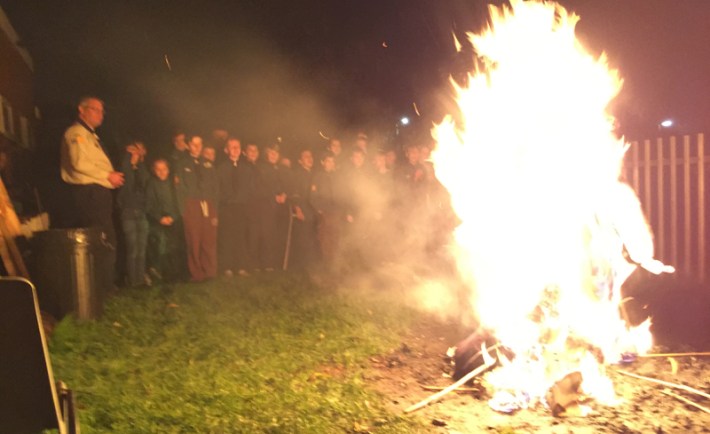 Bonfire night. Translated from the French – Good Fire (not actually true). The real origin of the word denoted a large open-air fire on which bones were burnt (sometimes as part of a celebration).

Luckily for us, no bones were burned. But we did make Guys for our bonfire, being that the event marks Guy Fawkes night. Once the teams had made their “Guy” – each had to present it, and create a story telling of how our person came to be burned at the stake. Some BRILLIANT stories were concocted – but the winner was the story of Justin Bieber!

Fires built, Guys burned at the stake, the scouts then returned inside for an hour of apple (and onion) bobbing, and flour truffle hunting (sweets, and the odd Brussel Sprout!)

A good and messy night was had by one and all. Scouts and Scouting is about doing your best and helping other people. So it was both our duty and a please to help out recently at the Bedford Foodbank.

Every day people in the UK go hungry for reasons ranging from redundancy to receiving an unexpected bill on a low income. Bedford Foodbank’s volunteers work with referral partners to provide a minimum of three days emergency food and support to people experiencing crisis in the Bedford community.

The St Andrews Scouts, as part of the new Scouting World Challenge Award, went along to the Bedford Foodbank to help sort, pack and date hundreds of donations. At this time of the year their stores are at their fullest. But make no mistake – this is rare, and the trust REALLY needs our help. Last year Trussell Trust foodbanks in the UK gave food over 1 million times to people experiencing food poverty. St Andrews Scouts did their bit to help this target rise further, and we aim to do this more regularly throughout 2016.