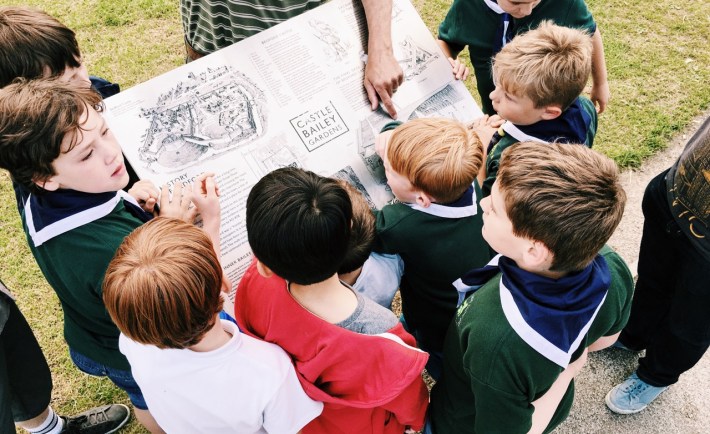 No I’m not claiming the town has had it’s day, although it has had it’s day a very long time ago when the de Beauchamp family’s Castle was seized early in the 13th century by a French mercenary Falkes de Breautae, a henchman of King John. A royal army came to smoke Falkes’ men out in 1224 and, after a great siege of six weeks, the keep and walls were ordered to be destroyed, but the mound remained and still survives. And even further back, woolly mammoths  roamed the town centre, and before that it was beneath the sea.

In an hour and a half, the Rowallen Cub pack were taken in two groups by official town history guides, to the places around the town that refer back to significant moments in the  town’s past. From the siege, to the site where John Bunyon was imprisoned, through to the fascinating history of the town centre church. The cubs were engaged, interested and asked many questions, testimony to a very successful evening of history!

This is a great example of the variety with which St Andrews Scout Group offers on a weekly basis. Next week it’s something entirely different…